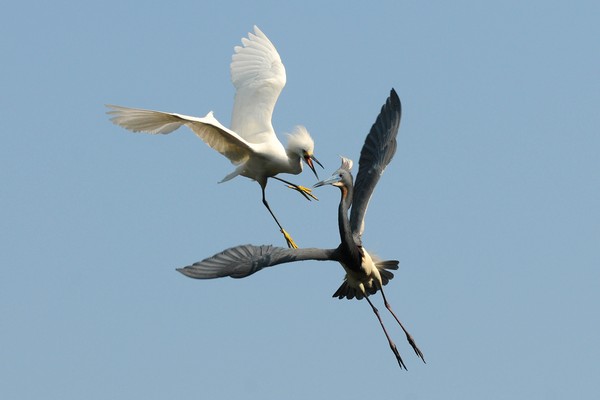 The St. Augustine Alligator Farm Rookery had a phenomenal nesting season this year with over 800 nests counted within two acres of habitat!  This season smashed the previous record of 395 nests back in 2008.  Drought conditions and the large number of wading birds within the rookery have been hard on the trees this year.  A dozen cypress trees have been purchased for planting this fall.  They, along with the addition of a few man-made bulkheads, will aid in bank retention and revitalize existing tree health.

The Roseate spoonbills seem to be here to stay with sixteen nests, quadrupling their nest count from last year.

The endangered Wood stork slightly increased their nest count over previous years, but seem to have reached a plateau.  Proper sturdy nesting structures may be a limiting factor and discussions are underway regarding swamp expansion.

Though Crocodile Crossing intitionally was not constructed near the rookery, it did pass through the zoo and Green heron nesting habitat.  Fortunately, this did not appear to affect their desire to reproduce.  The five nests observed is well within their average yearly count.

Thank you everyone, once again, for your continued support of our zoo and the Photo Pass program.  We look forward to each nesting season just as much as you!