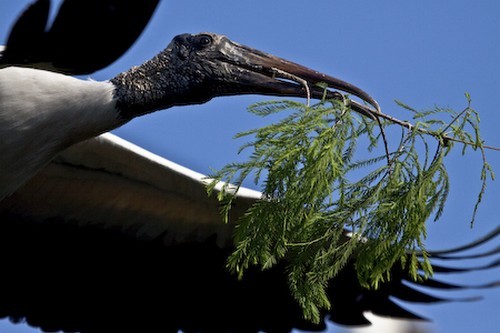 Wood storks have been roosting at The Rookery for many years but 2000 was a special one. This was the first year that the storks nested at The Rookery and they’ve been nesting annually ever since.

Wood storks are America’s largest native wading bird. They are tall and have long legs which are ideal for a wading bird species. Wood storks are white with black flight feathers and a thick down-curved bill. They are most recognizable by their dark, featherless head. Although they are related to other wading birds like heron and ibis, they are closer relatives of the New World vulture family.

During breeding season, Wood storks are typically found in South, Central and (southeastern) North America. In North America, they concentrate in Florida, Georgia and coastal South Carolina. Due to the continued decline in breeding populations, the U.S. Fish and Wildlife Service listed the Wood stork as endangered in 1984. Now, they are working on a recovery plan to take the Wood stork off of the list by 2020.

Florida has the largest nesting population in the U.S., but the Wood stork is typically found in the southern region because it is more suitable for their chosen habitat. To set up a nest, Wood storks prefer flooded, woody vegetation, usually choosing a large tree that is surrounded by water. But, due to habitat loss and changes in water-surface levels, these birds started moving north.

We believe this is why they started breeding here in 2000. Wood storks are pretty loyal to their chosen nesting sites and tend to return yearly as long as the area remains unchanged. So, we were happy to have them and to add them to our list of “regulars” in The Rookery!