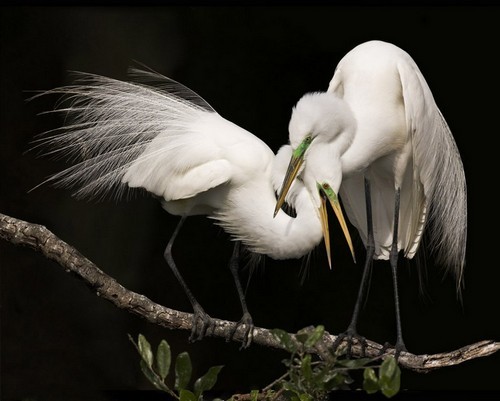 The first pair of Great White Egrets (Casmerodius albus) will be arriving at the St. Augustine Alligator Farm Zoological Park’s Natural Swamp and Rookery next week.

Last spring, The Rookery held 92 Great egret nests resulting in 189 chicks. The first birds start arriving around Valentine’s Day, with the first nest appearing by the beginning of March.

Great egrets’ habitat is any type of wetland. They can even be found on agricultural land! Therefore, The Rookery is a haven for these birds which typically build their nests above water in trees or bushes.

Great egrets tend to form colonies while nesting. The colonies are often mixed and can range from 10’s to 100’s of pairs. Males are typically the first to arrive to the nesting site. They begin collecting materials for the nest whilst attempting to attract a mate and defend their nests from other males.

During breeding season, Great egrets develop ornamental plumes called egrettes. These are used to attract a mate. Great egrets have a spectacular display called “backward stretch.” During this display, Great egrets shake their long nuptial plumes and move their tails whilst making undulating movements with their S-shaped necks. Their wingspan can range from 140-170 cm. and is quite a sight to see!

Once a mate is chosen, the pair is monogamous. They work together to build their nest. The males bring the materials to the female who then places it on the nest. Once the nest is complete, love is in the air.