Put Your Money Where Your Mouth Is…

It is a strange tradition to throw your money away, but that is exactly what people want to do when they see a pond. The problem for our animals is that the coins are toxic to them and, in the case of alligators and crocodiles, the coins can sit in their stomach for years leaching toxins into their system. Some alligators are actually very good at sweeping coins off the bottom of a pool and swallowing them. One zoo in Florida had a Nile crocodile die with 1.5 pounds of loose change in its stomach.

Experience has shown that simple signs asking people not to throw coins are not very effective, so we use an alligator bank. It draws people’s attention, has two simple statements and is fun to feed coins into:
“Coins can kill animals. Please do not put coins in our pools.”

“Coins can save animals. Money you donate here will go to conservation programs.” 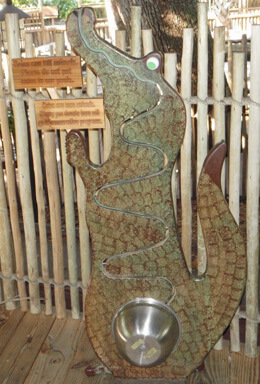 Since putting the bank in place, the coins in the pools have been significantly reduced. In addition, we have been able to raise money for a variety of conservation projects. Some of the organizations and projects we have contributed to include: