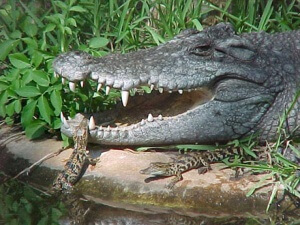 Siamese Crocodiles as parents:  In May of 2000 the St. Augustine Alligator Farm decided to do things a little differently.  Typically, when the alligators or crocodiles lay eggs the keepers collect the eggs and put them in an incubator.  There are several reasons for this.  The success rate of artificially incubated eggs is usually higher, the sex of the animals can be controlled by the temperature at which they are incubated, and it keeps the larger animals in the enclosure from eating the hatchlings.  Though mother alligators are usually very good parents, some literature implies that male American Alligators tend to be unconcerned with their offspring, or worse yet, have been known to eat the hatchlings.  Because of multiple paternity, it is possible the males don’t even know which hatchlings are theirs.  It is also possible, that observations have been misinterpreted.  Neill points out, in his 1971 book, that except in very controlled circumstances, it is difficult to say with any accuracy whether an alligator is male or female just by looking at it, much less know if it was, in fact, the parent of the alligator being eaten.

While Neill is not willing to authenticate observations of adult alligators cannibalizing their own young, he is quick to disregard any possibility of crocodilians playing a significant role as attentive parents.  However, the following two accounts might have changed even Neill’s mind.

On May 21, 2000 our female Siamese crocodile built a beautiful nest right in front of her exhibit.  We decided to leave the nest alone for all of the visitors to see.  We had no idea what would happen.  There were any number of things that could have gone wrong.  The nest could have been too dry, fire ants could have claimed the eggs, or the male could have eaten all of the young as they came out of the nest.  We just had to wait patiently.  It turns out the nest was built over a sprinkler head which kept the inside of the nest quite moist.  Ants were seen several times at the nest, but were controlled.  And when it came time to prove the male’s intentions, he performed admirably.

We are unsure exactly when the female actually laid the eggs in the nest mound.  One week after the mound was built, we gently opened the top of the nest and removed the top three eggs.  They were nicely banded and we put them in our incubator, just to make sure some of the clutch would survive.

At 7:30 am, on August 13, 2000, about seven weeks later, the female was seen lying on the nest mound with her head cocked sideways appearing as though she were listening to the nest.  By 8:30 am eight hatchlings were out of the nest and eggshells were noticed floating, or laying on the bottom of the pool.  As we watched, the female slowly used her front legs to pull dirt away from the top of the nest.  When she uncovered a hatchling, she gently picked it up in her mouth and carried it to the water.  If she uncovered an egg that was not yet hatched, she gently broke the egg with her mouth, scooped up the baby and again carried it to the water.  Sometimes the hatchlings were still attached to the egg by their yolk and both baby and egg would be carried to the water.  One little guy had quite a struggle as the egg he was attached to started to fill up with water and began to drag him under.  He was pulled partially under water before he managed to wiggle his way free.

By 12:30 pm the female got out of the pool and started to bask.  There were seventeen hatchlings all huddled together at the edge of the pool, and it was assumed that this would be all that would hatch.  But, at 2:45 pm the female returned to the nest and removed four more hatchlings.

The adult male stayed in the water during this entire process, and was quite curious as the female brought the babies to the pool.  He swam over to almost every new release and watched as things went on.  He never made an aggressive move toward any of the hatchlings.

On several occasions the female brought whole, unopened eggs to the water and released them.  The eggs floated, and she left them, with no apparent interest in their future.  The adult male bumped into one of these eggs as he was patrolling the pool.  He gently picked it up in his mouth.  At first, it looked as though he swallowed it, but he rolled it around on his tongue for almost a minute, and then gently broke it open.  He then rinsed the shell out of his mouth, but the egg was empty.  There is no way of knowing fur sure, but it appeared that he was trying to open the egg and release a baby, just as the female had done.  After opening the first egg, he seemed to patrol the pool more diligently, even diving to the bottom of the pool and gently breaking open what was left of hatched eggs.  The male never went to the nest to retrieve eggs or young, but did open several of these infertile eggs.  His basking site is near the nest mound, and twice during the day he crawled out and baked near the nest.

One week after hatching, the baby crocodiles started chasing and eating crickets and mealworms that were tossed into the exhibit.  They are fed worms, crickets, and gator chow every two or three days.  On August 25, 2000, twelve days after hatching, many of the babies were seen basking on the back of the parent crocodiles.  This has been a common sight on warm afternoons ever since.  When in the water, babies tend to congregate around the parents’ heads, some even resting on the adults’ heads as if they were a floating island.

The goal of leaving the nest alone was to allow our visitors to be able to see the nest, the hatching, and now a family unit of crocodilians on display.  It has been a great success.  Visitors who take the time to look carefully can see many of the baby crocodiles usually, lined up at the edge of the pool.  This is not the first time that the St. Augustine Alligator Farm has hatched Siamese Crocodiles, but it is the first time that we have allowed the parents to do all of the work.  The three eggs that we put in the incubator from the nest hatched three days after the eggs in the exhibit hatched.  We have since introduced these three babies back to the exhibit and they have been accepted into the family unit.

As long as we had this unique setup, we decided to try a couple of experiments.  First, three yearling crocodiles were added to the exhibit to see how the parents reacted.  These yearling crocodiles were offspring from the adults, but had never seen their parents, as they were artificially incubated and raised separate from the adults.  The adults accepted these juveniles in the exhibit as well, and all are living comfortably together.

Secondly, we introduced a couple of hatchling American alligators.  This introduction was very interesting as well.  The alligators did not seem to mind being with the crocodiles their own size, but were intimidated by the adults.  While the juvenile Siamese crocodiles would congregate around the adults (even the yearlings), the juvenile alligators would swim away from them.  Early on, there were several occasions that the alligators were seen around the adult crocodiles, but the alligators seemed shocked when the adults moved, and they swam away quickly.  This test was performed to see if the parent crocodiles could distinguish between hatchling species.  It is generally accepted that some crocodilian species will guard their offspring in nurseries.  In other words, one female may guard offspring from several females in the area.  One of the hatchling alligators did not survive in the exhibit.  It appeared to have been accidentally crushed by a basking adult.  However, one American alligator now seems to be just as comfortable as the young crocodiles and can still be seen, more than tow years later, swimming, feeding and basking with its surrogate family.

Watch video of mother crocodile helping young out of the egg