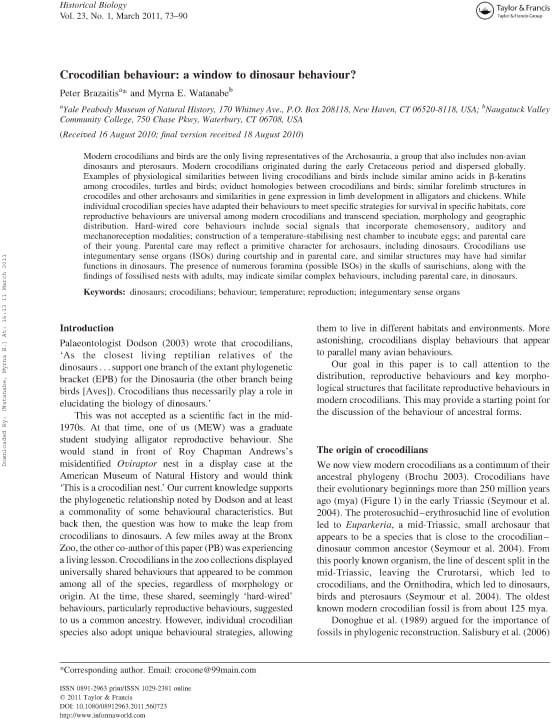 Modern crocodilians and birds are the only living representatives of the Archosauria, a group that also includes non-avian dinosaurs and pterosaurs. Modern crocodilians originated during the early Cretaceous period and dispersed globally. Examples of physiological similarities between living crocodilians and birds include similar amino acids in b-keratins among crocodiles, turtles and birds; oviduct homologies between crocodilians and birds; similar forelimb structures in crocodiles and other archosaurs and similarities in gene expression in limb development in alligators and chickens. While individual crocodilian species have adapted their behaviours to meet specific strategies for survival in specific habitats, core reproductive behaviours are universal among modern crocodilians and transcend speciation, morphology and geographic distribution. Hard-wired core behaviours include social signals that incorporate chemosensory, auditory and mechanoreception modalities; construction of a temperature-stabilising nest chamber to incubate eggs; and parental care of their young.

Parental care may reflect a primitive character for archosaurs, including dinosaurs. Crocodilians use integumentary sense organs (ISOs) during courtship and in parental care, and similar structures may have had similar functions in dinosaurs. The presence of numerous foramina (possible ISOs) in the skulls of saurischians, along with the findings of fossilised nests with adults, may indicate similar complex behaviours, including parental care, in dinosaurs.