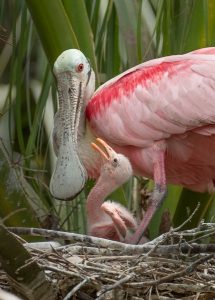 Mid February – The first pair of Great egrets arrive around Valentine’s Day.  More are close behind and begin nest building.  Roseate spoonbills stagger their nests throughout the season, arriving as early as mid-January!

Mid April – The Green herons start nesting within the park (not the rookery).  Still lots of displaying birds of every species.  Spoonbill chicks hatching.

Early May – There are chicks of every species in the rookery at this time, but still displaying from all species with the exception of the wood storks.  Green heron chicks hatching out within the park.

Mid May – The Great egret and stork chicks are giant.  There are chicks of every size from every species.  Many species still continuing to display.

Early June – Nothing has even fledged yet.  The displaying has started winding down but there are still birds on eggs.  Chicks everywhere. Latest observed hatching of spoonbill eggs. Displaying is over.

August– Nesting season is complete though a few stragglers remain. The majority of the adults have begun migrating south.